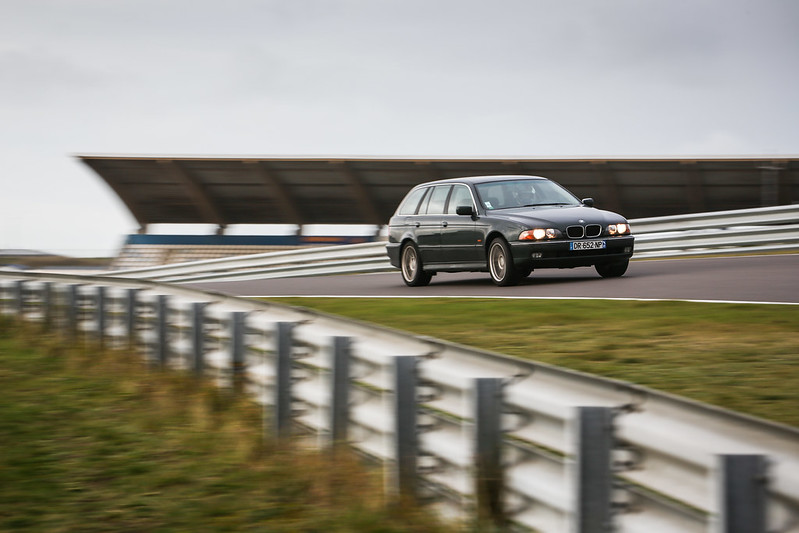 This blog post will stand on its own as a testimony of the gearbox swap I did on my BMW e39 5 Series Touring but, if you want to learn more about the car itself, I invite you to read my previous blog post where I introduced it. This article is technical by nature, I’ll try to keep it accessible for everyone, but it might be dryer than other posts you might have read on this blog.. Consider yourself warned.

Back at the end of 2017, when the temperatures started to drop is when I first noticed the 5 speed manual gearbox in my 5 series was showing signs of fatigue. Driving the car one morning, I shifted into fifth gear while the gearbox (oil) was still cold, drove a few kilometres and when I downshifted out of fifth, the shifter stayed leaned to the right, aligned with fifth gear’s slot on the H-pattern. Only after driving a good while and downshifting a few more times would the shifter find its center position again. At first, this was an intermittent problem limited to specific conditions (low outside temp, cold gearbox, shift into fifth), but with time it happened more and more often, during hot days and even once on track (very disturbing).

Something needed to be done sooner rather than later, especially as my partner was now taking driving lessons and would soon be driving the 5 Series. Driving a large estate car with a long invisible bonnet was already intimidating enough and I didn’t want to impose on her a shifter where finding gears was guesswork.

BMW forums quickly revealed that this was a common problem on high mileage BMW S5D manual gearboxes which are otherwise reliable. The shifter is centered with sprung pins located on the side of the gearbox. With age and miles, the pins stop sliding freely and the shifter isn’t supported in its lateral movement anymore. This is commonly referred to as “fifth gear lean”.

The fix here is to remove the caps holding the pins on the gearbox casing, change the pins and their liners and refit new caps. Specialised BMW companies now offer the necessary tooling and repair kits but accessing the caps can only be done with the gearbox out of the car.

As often when it comes to daily drivers though, actually taking the time to perform the repair is more difficult than buying the parts or just living with the car as is. I’d learn to live with it and when my partner got her driving license, she immediately felt more at ease driving our 1974 Mercedes 608d (stubby nose, high seating position and so much torque it’s almost impossible to stall), meaning the pressure to repair the gearbox was somewhat off. Still, shifting feel is an essential part of the connection one has with a car and as a manual gearbox “aficionado”, I was still looking at possible solutions online (read more exciting ones).

Even though the e39 chassis is now becoming a collectible platform (when in the right spec), owners tend to be conservative in their relationship with their cars meaning there’s less aftermarket support for performance/improvement parts and less knowledge in what is and what isn’t possible to do, compared to other more popular BMWs. I often find myself browsing through e46 3 Series forums and racing parts websites to get the infos I am looking for (‘98-’03 e39s share engines and parts introduced on the e46 3 Series).

Browsing through 3 series forums, I realised that the later BMW e46 330i-s came with 6 speed manual gearboxes. The e39 5 Series with inline-6 engines (petrol and diesel) was never offered with a 6 speed gearbox. Only the more powerful V8-powered e39s (540i and M5) had a 6 speed manual (with a bellhousing that fits only V8s). The fact that e39 530i-s came with the same M54B30 engine as the 330i was enough to get wheels turning in my head about swapping a 6 speed manual in my 2000 523i Touring. Further research revealed that the 330i 6-speed gearbox is the Getrag S6S-420G also used in the BMW M3, and although it does bolt up to the M52, M52TU and M54 engines, they are highly sought after and cost around 1000 euros second-hand. That was more than I was willing to spend on a car I bought 2100 euros 3 years before. This was a setback but hope was rekindled when I “read” on a Russian forum of someone having successfully fitted a “GS6-53BZ” on an e39. Hurrah!

Let me stop here a second in this story and give you a bit of info on my e39 523i Touring. I always enjoyed driving the car but one aspect that I was unhappy about was the gearing. You see, although the 5 speed Getrag S5D-250G fitted to the car has longish ratios, where third gear goes all the way to 130km/h (underwhelming acceleration), the final drive is short enough that when cruising at 135km/h in fifth, the engine turns at almost 4000rpm. On flat motorways with eco tires the car can return 8.5L/100km (with cruise set at 135km/h), but I knew better economy was achievable with lowered engine speeds. This situation seems to only affect 520i and 523i Tourings, which were delivered with shorter final drives (3.23 in the 523iT) compared to 528i and 530i Tourings (3.07) and Sedans (2.93). The obvious solution here is to retrofit a diff from a 528i Touring or Sedan, but that would come at the expense of acceleration. With even longer gears, a 523i Touring loaded with all my tools would be so slow, I’d be ashamed to use the left lane on the motorway. This is why a 6 speed gearbox swap would be ideal. Now, back to the story.

Wikipedia revealed that the GS6-53BZ is the 6 speed manual gearbox found on newer BMW models powered by the turbocharged inline 6 (N54B30 engines). This gearbox has a twin in the form of the GS6-37BZ : same gearbox with lower torque rating. While the demand for second hand 53BZs (and its Diesel sisters, the -53DZ) is high because they’re often used in competition to replace weaker gearboxes, the 37BZs tend to fall under the radar. The cars which came out from the factory with this gearbox are still relatively new, and because the engines used in those cars were all naturally aspirated and relatively low power, it seems the demand for them simply isn’t there on the second-hand market. Last but not least, the gearing of the 37BZ is spot on for my e39 Touring. When comparing a 37BZ to an S5D, the first four gears in the 37BZ are slightly shorter, meaning slightly better acceleration, more pleasure on spirited drives and better usability driving around town. Both gearboxes have a fifth gear ratio of 1:1, this means that driving in fifth with the 37BZ, would return the exact same engine speeds as with the S5D, but the 37BZ has that precious extra gear that gives you the lower rpms (just about 3000rpm at 135km/h in my car), and theoretically better economy (at 3000rpm, the engine still has enough power to pull the car without using more throttle).

I didn’t need more to start looking for GS6-xxBZ. The search lasted a few months, as these gearboxes are not that easy to come by, but I eventually found a GS6-37BZ with shifter linkage out of a BMW e85 Z4 (3.0i M54B30 engine), in France, for 250euros. The gearbox was dry except for a small seep from the shifter arm o-ring and the shifting feel was crisp. A deal was quickly made and I was now on the hunt for the other parts needed for the swap : e60 530i propshaft, flywheel and new clutch.

The propshaft was quickly found in a Dutch junkyard for 90 euros and a new clutch kit from Sachs ordered for 150 euros but I hit a wall again with the flywheel. Still trying to keep costs in check, I didn’t want to buy a brand new dual-mass flywheel for close to 500 euros, and so was limited to what was available in European classifieds and junkyards. The flywheel that would fit my engine crankshaft was only used in manual M54B30 powered e60 5 Series and e85 Z4 (lesser Z4s used a 5-speed gearbox with a different flywheel), produced during 2004 and 2006. It was surprisingly difficult to find one for the right price, but after two months of digging, a flywheel in good shape came up for 150 euros. This gives us a total cost for the hardware of 650 euros (including a new o-ring from BMW).

Considering I drive around 30.000km with the BMW each year, and assuming the fuel consumption with the 6-speed gearbox will be reduced by 1L/100km, this will save 300L of SP98 per year, which, with an average of 1.5 euro per liter, returns 450 euros saved on fuel. Meaning in just around 18 months the costs of the gearbox swap would be amortized.

This concludes the thought process behind my decision to replace the tired 5-speed gearbox by a 6-speed one, instead of repairing it. I’m sorry if reading all those details and BMW engine codes bored you, but I felt it important to explain in detail why I took this route for my daily driver and it might also be useful for other e39 owners.

In part 2 I’ll continue onto the actual swap of the gearbox.