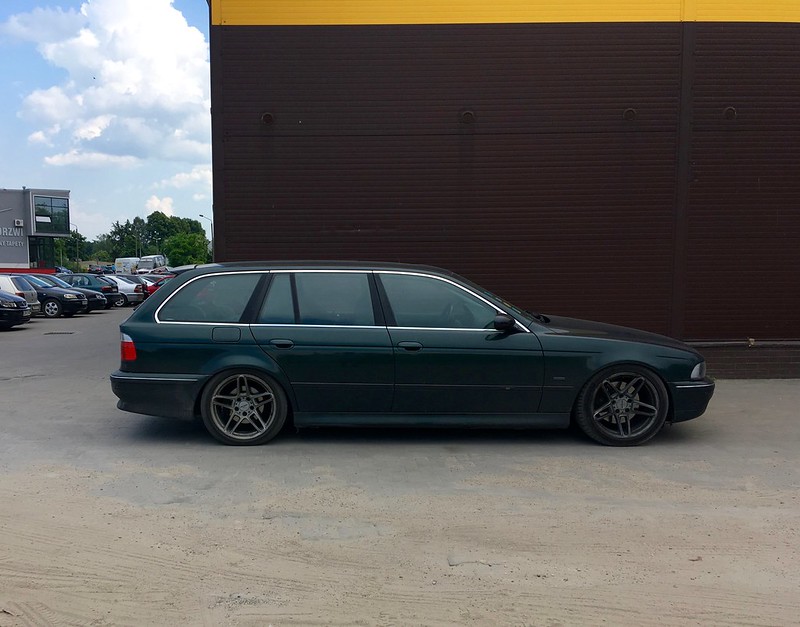 I am someone who doesn’t really like to talk about myself, but I understand that my customers or just visitors of this website might like to know more about me. I thought I could talk to you about my car, and by doing so you might get to know more about me and at the same time still be relevant for the website’s blog section. So here goes nothing.

I presented the BMW briefly in “That dreaded question: what’s your favourite car?” blog post but I’m sure some of my geekier followers could enjoy more in depth content.

The car in question is a 2000 BMW 523i Touring manual. I bought it in 2015 with 211.000km in eastern France. The car was delivered in Germany (German stamped maintenance booklet) and was recently imported when I purchased it for a modest 2100 euros. The fact that the car was what I call “granddad spec” or “papy spec” (Oxford Green II paint (430) with fabric English green interior (F6EG), cassette player, and 15 inch steelies) didn’t matter to me. Finding a large estate car with a petrol engine and manual gearbox under 2500 euros is hard enough without being picky on the colour combination. As I drove it home taking the long way through the Vosges mountain backroads, I remember being impressed by the smoothness of the ride and inline 6 engine, the stability of the chassis and feedback from the steering.

Since that day I’ve used the car as my daily driver and it never disappointed. Whether it is to go on holiday across Europe, move houses, carry my tools to various job locations or loop the Nurburgring Nordschleife, the Touring’s strong points shine : comfort, practicality, and “Freude am fahren” (driving pleasure).

As of Spring 2020, the car has 335.000km and in the last five years I changed quite a few parts on it. I’ll spare you the boring maintenance and servicing (I average three oil changes per year!), to focus on the more notable changes.

Although the car’s comfort is very important to me, after driving the 5 Series for a year on 15 inch rims with Michelin Energy tires I found myself wanting to add precision to the chassis. Loading a chassis through turns on a twisty road has always been more fun to me than speeding on straight lines. That is why today, the car drives on Michelin Pilot Sport 4 shod ACSchnitzer Typ 3 rims (245/40/18, 8.5Jx18et15 all round), Bilstein B6 shock absorbers coupled with a front strut brace with all new suspension arms from Lemförder. The last thing I need to decide on is whether to replace the rear subframe bushings with original ones or PU equivalents (any thoughts are welcomed). But even as it is today, this setup is already a big improvement over stock handling and road feel characteristics.

Brakes were another concern. The original 296mm discs setup did the job for daily driving duties, but when the car was fully loaded or when descending mountain passes with enthusiasm, it clearly had its limits. Cue in 324mm front Brembo discs with later 540i-530d e39s calipers, coupled with EBC Yellowstuff pads and Goodridge stainless steel braided brake lines. This simple modification really changed the braking performance of the heavy Touring, especially when the pads start to have some heat into them. I am happy to report that the e39 Touring now brakes harder and shorter than my friend’s e46 Coupe.

The car has the right balance of everyday comfort and chassis response one can expect from a twenty years old BMW estate. The obvious missing element here is, you might have guessed it, power. The car’s M52B25TU produces 170PS@5500rpm and 245Nm@3500rpm. Nothing to write home about, albeit mileage is quite decent for a 20 year-old 2.5L naturally aspirated (NA) engine (8.5L/100km on the motorway with 15 inch eco tires).

Every person who knows a thing or two about engines, knows that extracting additional power from a modern NA engine is difficult and expensive. M52TUs are no exception and it is widely accepted that it is easier and cheaper to swap a more powerful engine than to modify the original one. The only modifications I did to my M52B25TU are to bolt the intake manifold from the bigger 3.0L M54B30, which is known to flow better and give a bit more top end power (engine pulls all the way to the redline now) and to remove the exhaust middle muffler. The stock exhaust system on the e39 comes with catalisators in the exhaust manifolds, then a first middle muffler, a resonator, and a rear muffler. Saying the engine sound is muffled is an understatement. Removing the middle muffler and replacing it with two 304 stainless steel pipes doesn’t add power (the restriction is in the manifolds and cats), but it liberates the sound of the inline 6 when pressing on the accelerator pedal while keeping the noise nearly identical to stock when cruising on the motorway. The car is still my daily driver and a constantly loud and drony exhaust is a big no-no for me.

I am still longing for more power though, and an engine swap will happen, eventually, when the faithful 2.5L will have had enough. Jury is still out on what engine to use. Sensible choice would be a 3.0L M54B30 (231PS), but there are many more enticing options…

In the meantime, there is one last modification I did on the car last summer, but it’s one worth a separate article. Stay tuned.