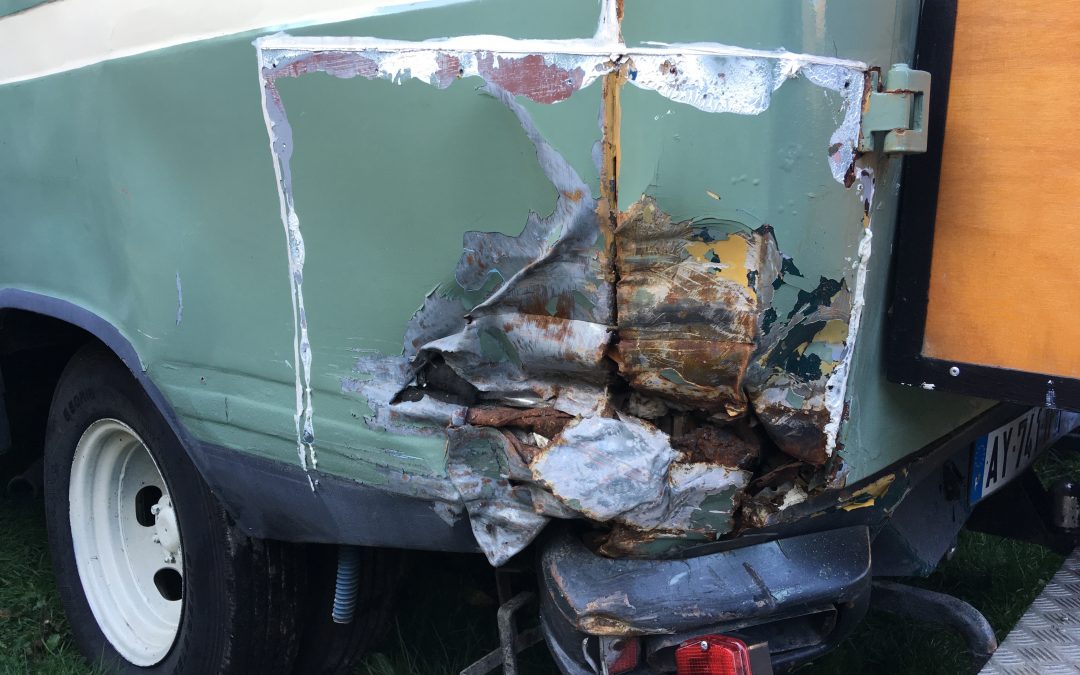 I met Julien Navarre through the Mercedes 508D fan page on facebook. We were both in Bordeaux at the same time so we decided to meet up.

He told me that earlier in the year he’d experienced an unpleasant hit and run incident. While he was sleeping in the van in the center of Bordeaux, around 2AM a car crashed into the back of the van and rebound on the left front wing. The car didn’t stop for long and was gone before he could get up and take down the number plate.

Julien was gutted. The rear left corner of the van was completely torn off, the left front wheel arch was badly damaged and the front bumper almost ripped out. 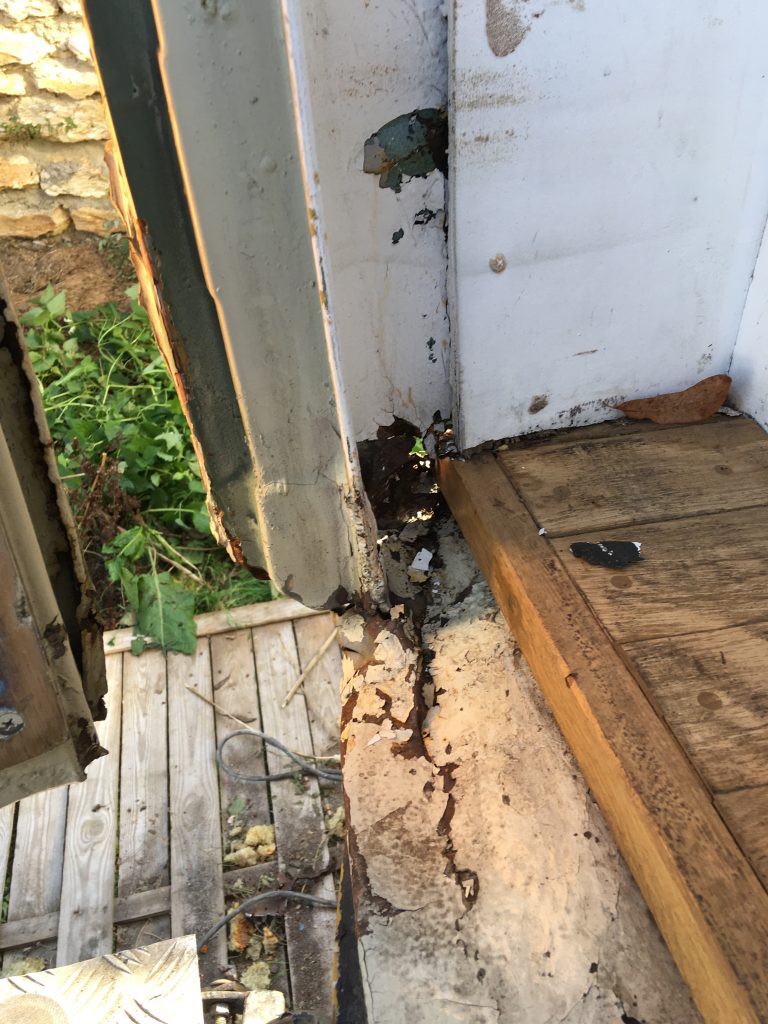 Damage at the rear

The police never found the other car, and Julien was left with his only vehicle in very bad shape.

He set out to find a body shop that could repair the van, but nobody wanted to start working on the 508D. Most places are used to working on modern vehicles with new body parts readily available through the dealer network. With an old vehicle like the Mercedes 508D, you either have to rebuild panels from scratch or cannibalise another van at the scrap yard. And you never know what you’re going to find once you start digging into a 40-plus-yearold body with half a million kilometres.

You can imagine how Julien’s face lit up when I told him that I was a welder specialising in car repair and restoration. We agreed to meet after the summer to repair the van.

A few days before I started work on the van, Julien found a fellow 508D owner who was parting a van before sending it off tot the scrap yard. I told Julien that it would be a good idea to cut the rear corner of the van to weld the pieces to his own van. It would be quicker than me having to rebuild everything from sheet metal and thus save him money. 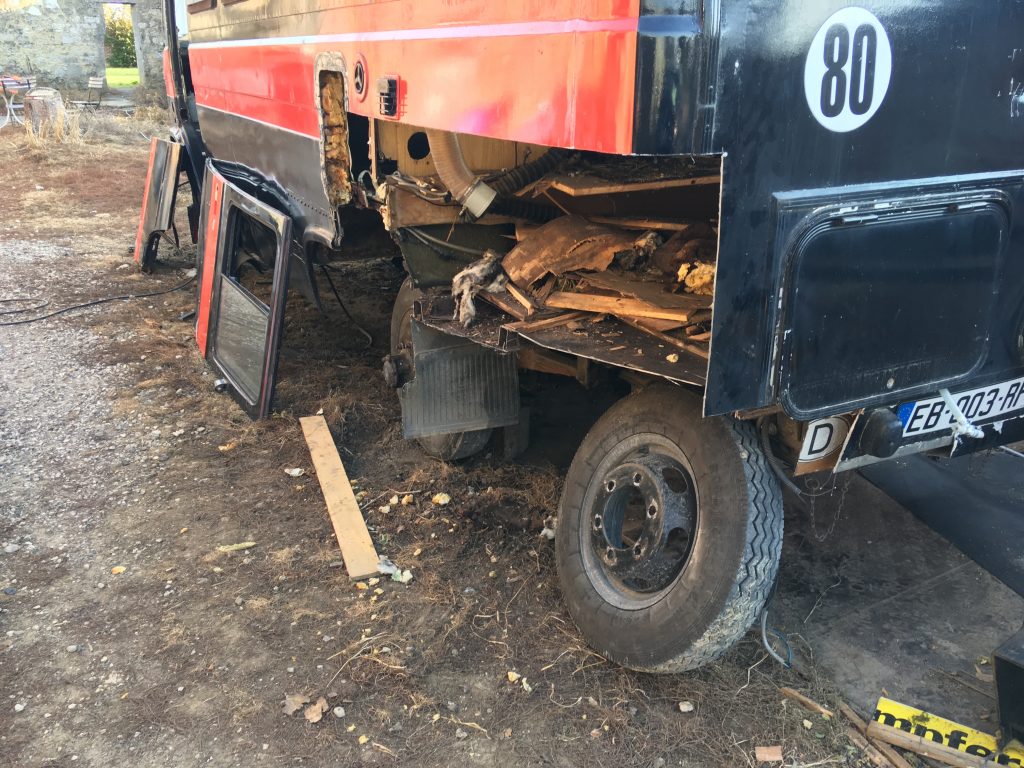 The rear quarter panel was not perfect, having been repaired with original plates screwed on the old ones instead of welding. But it was better than nothing. 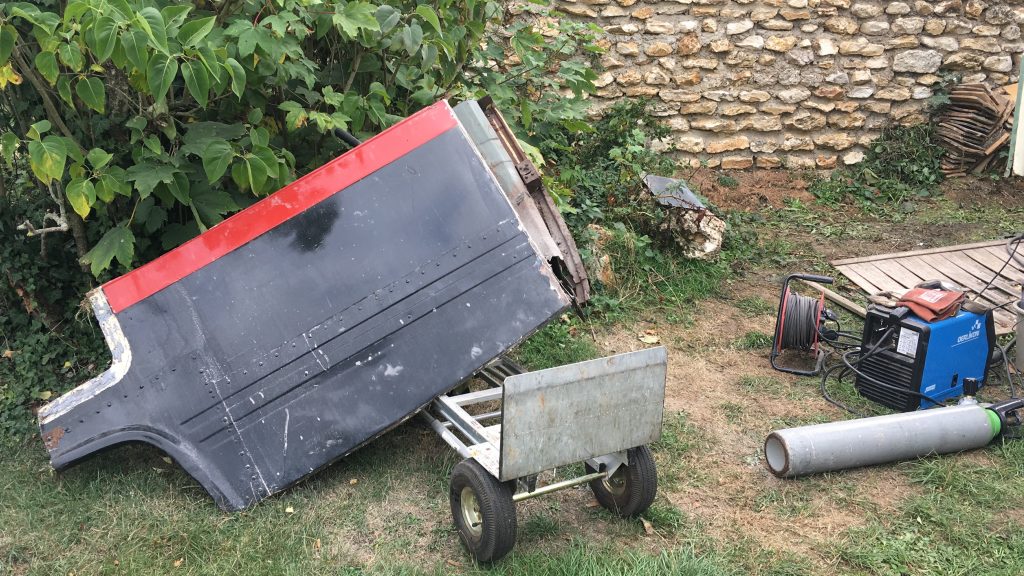 New panel to be welded in

I began by cutting and removing every bashed, torn or rusty piece of metal to get a better picture of what I was working with. I had to remove the outside plate of course, but also the bumper support, part of the number plate recess, some of the floor and a supporting beam. 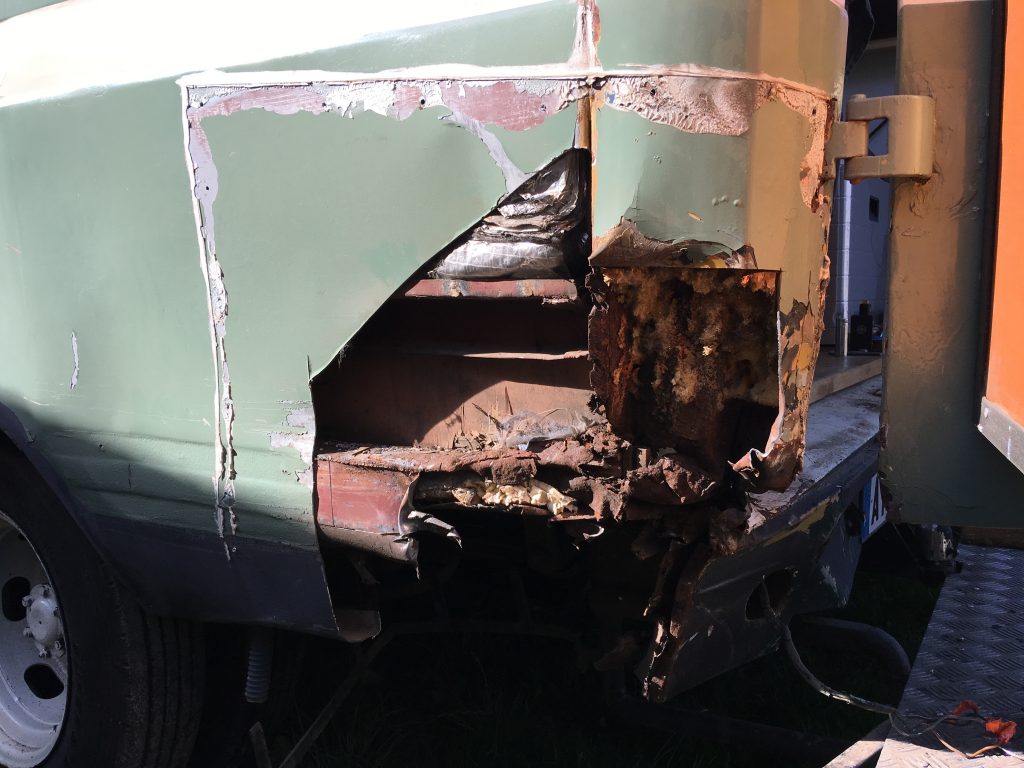 The next phase consisted of recreating a healthy base to build on. New lateral beam, new support for the rear bumper and a repaired floor. When that was done, I switched to the piece from the donor van. I’d taken a big piece: from the middle of the wheel arch to the door hinges,about one meter high. Not everything was needed of course. My idea was to only use the exterior plate, and scrap all the rest since I’d already reconstructed a healthy base to build upon. 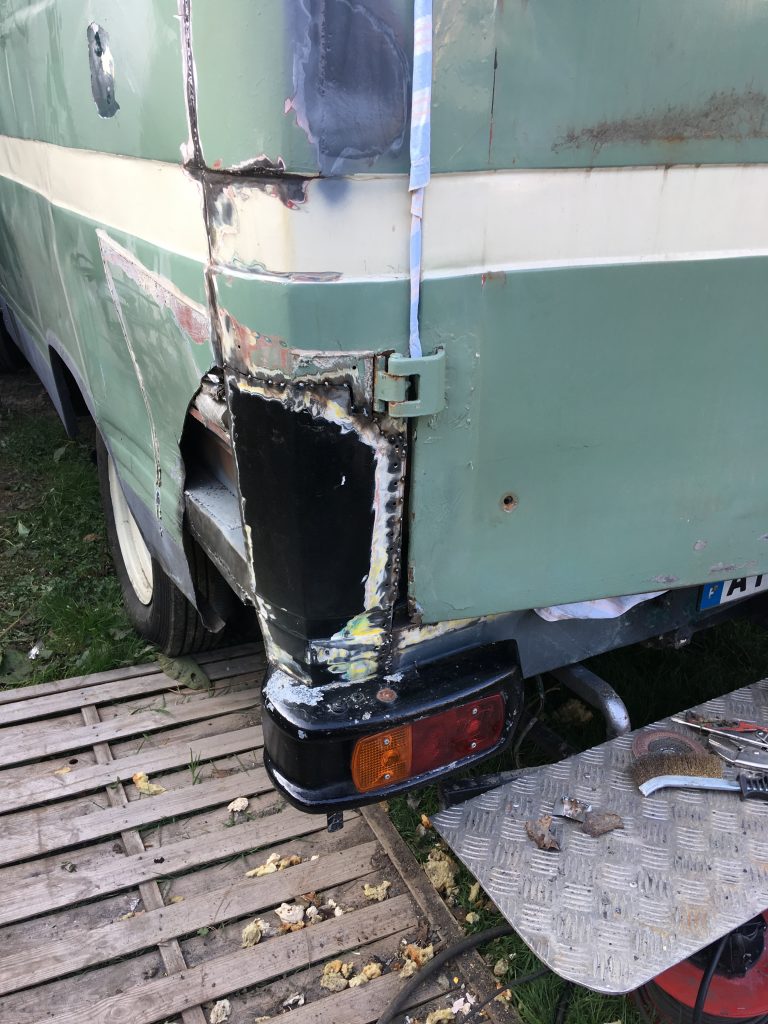 When the exterior plate was free and its surface rust removed, I test fitted it onto the van and tacked it in place. When I was sure of the position, I welded it completely.

Test fit of the new panel 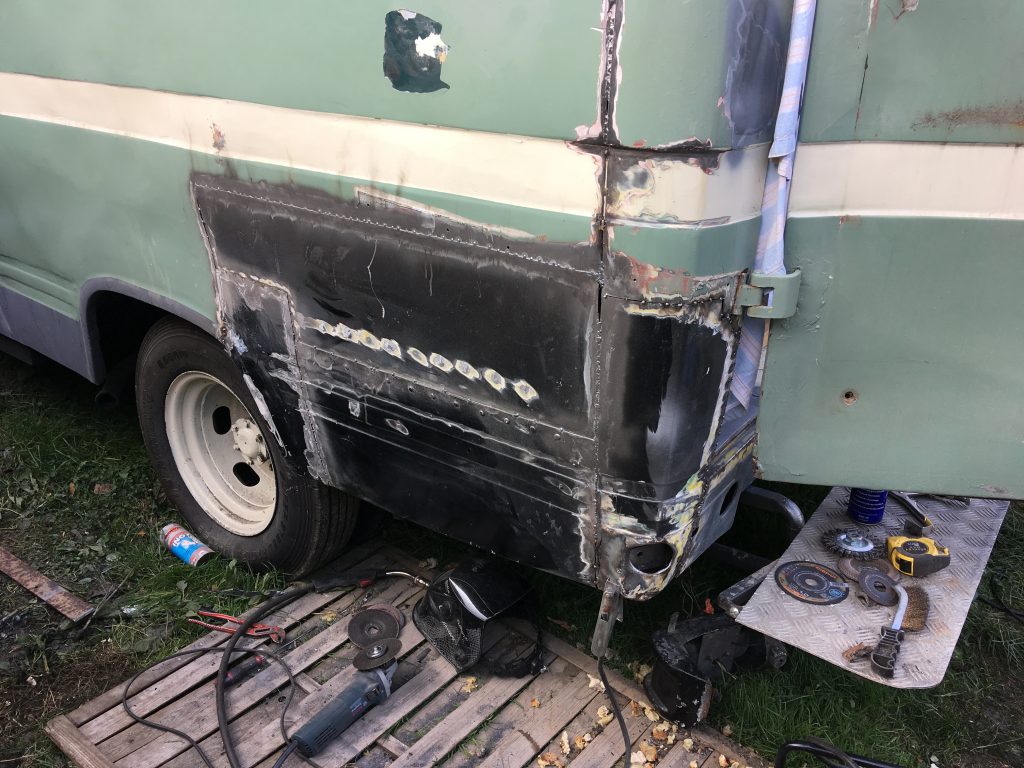 Once the metal work was finished, we protected it with a galvanisation base product. Then it was only a matter of using a bit of body filler to smooth the last imperfections out before primer and paint. Julien will be painting the van himself since he still had some of the original paint from when he’d bought the van. 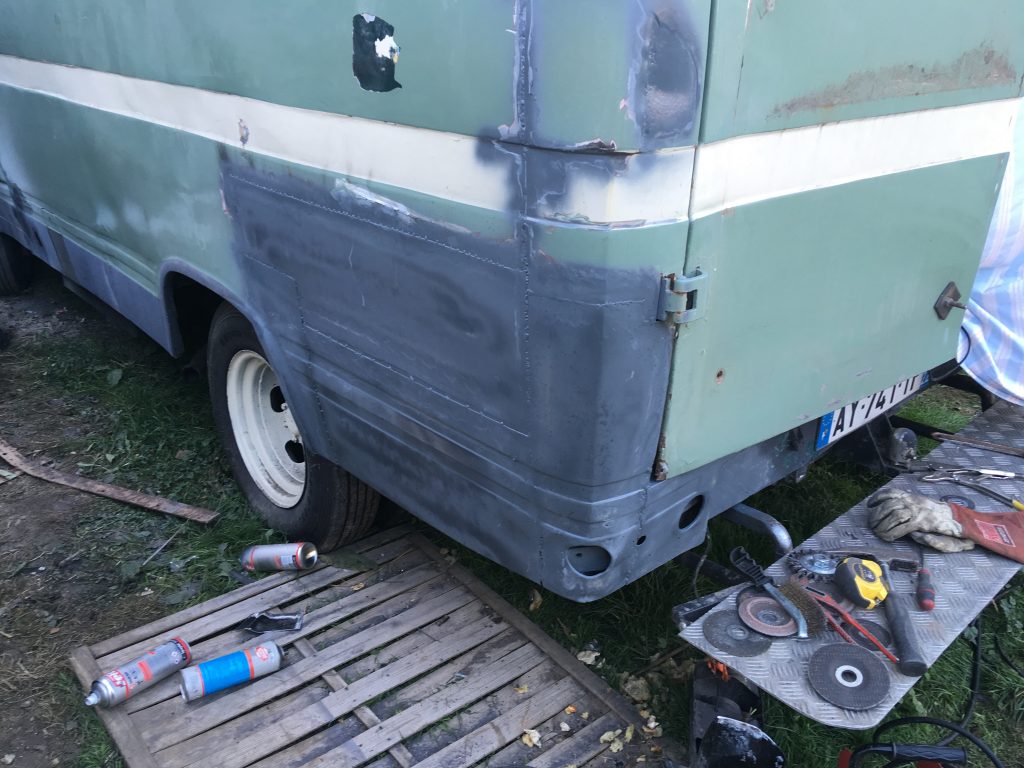 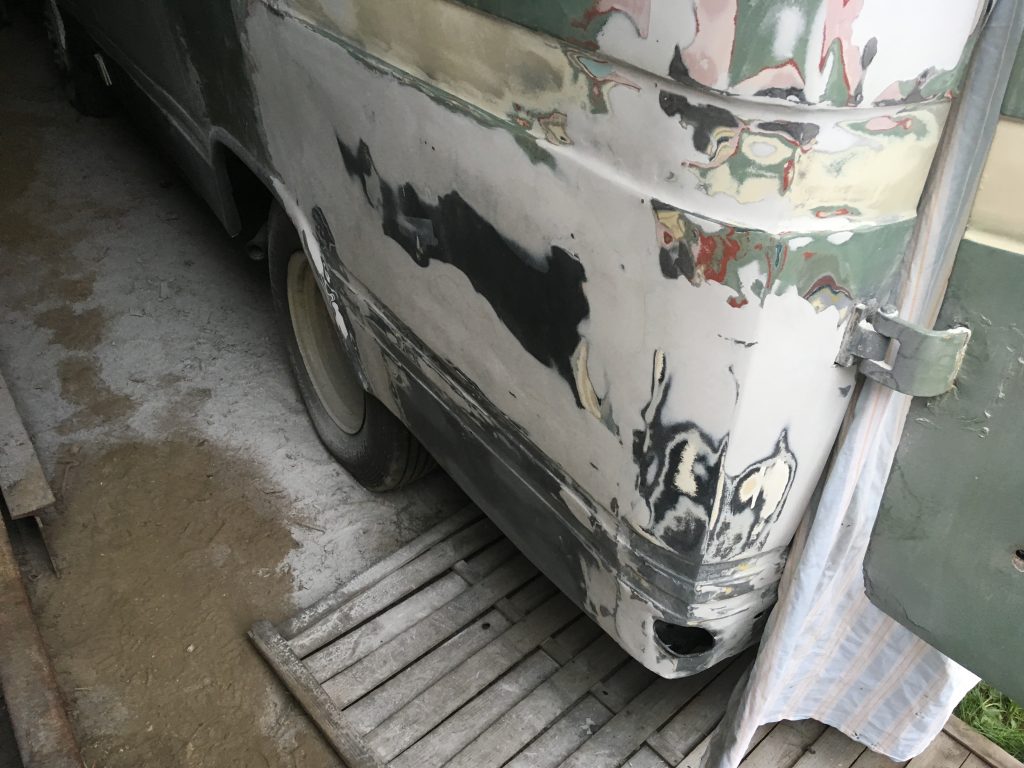 In the end, I worked around 30 hours on the van. I worked mostly on the rear but also welded a couple of plates on old, leaky ventilation holes that had been badly sealed off.

I am pleased to have made a fellow 508D owner happy. Now Julien no longer has to think about being hit by a drunk driver every time he looks at his van. He also learned quite a bit by looking at how I was working and is now thinking about buying his own welding machine. Maybe our next project together will be welding lessons…

I’d also like to thank Julien and his family for the warm welcome they gave me while I worked at their house. My stomach was always full, and Julien even took a few cool shots of me at work. Forming friendships, sharing meals and the pleasure of guiding my clients in their project as we work are all things that are pretty unique to being a travelling welder — and all things that I love about it.